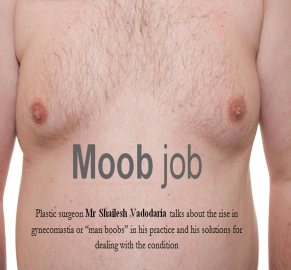 gynecomastia amongst male young population in my practice. I have observed that some young males have been taking testosterone -based supplements in order to increase their muscle mass. Once they stop these hormone supplements, the  oestrogen/testosterone  ratio  in  their  body  gets disturbed which is often followed by a rise in oestrogen levels, leading to enlarged breasts. This is due to their testes becomes “lazy” to produce testosterone as it is artificially supplemented.

On the other hand, there is no known cause for gynecomastia for majority of men. Very rarely, gynecomastia may develop due to intake of medicines for high blood pressure, heart disease and prostate cancer, certain drugs such as marijuana and anabolic steroids. It can also develop following diseases causing liver failure, testicular cancer. It can be a component of rare congenital abnormalities. However, the good news is male breast enlargement is treatable by cosmetic surgery.

For men who feel self-conscious about their looks, male breast reduction surgery can be considered. This procedure involves removal of tissues from the breasts and liposuction. Excess skin needs removal particularly following massive weight loss.

Grade 1: Tight skin that does not require reduction

Grade 2: Some saggy skin that may or may not require reduction

Grade 1 gynecomastia is corrected with liposuction and/ or open excision, and do not require skin reduction.

The majority of grade 2 gynecomastia in young patients is corrected with liposuction and/or the open technique. If loose skin is significant and less elastic, particularly in mature patients, then the skin reduction procedure is usually required, leaving behind a circumferential around the areola.

Grade 3 gynecomastia would involve liposuction, removal of the glandular component with an open technique and removal excess redundant skin and adjustment which will leave behind a relatively more conspicuous scarring.

TYPES OF GYNECOMASTIA AND TREATMENT SOLUTIONS

Fatty gynecomastia in common in young patients with good quality skin, but can affect all ages. These patients are normally suited for correction with liposuction only. Liposuction involves minimum scarring and can be performed under local or general anaesthetic and is suitable as a day case procedure. The downtime following liposuction is minimal and patient can resume day-to-day activities within 48 hours.

If a patient has got localised gynecomastia without much fat, then an open excision technique (removal by cutting) is

used and there is no need for liposuction. This is common with muscular patients with a well-defined chest and normal body mass index.

Liposuction is sometimes needed to improve the overall contour after the removal of the glandular component (fibrous tissue).

Patient with mixed Gynecomastia, where there is existence of glandular tissue/fibrous tissue localised deposition of fat are suitable for liposuction assisted open excision (open approach) surgery. In this technique, the fatty component is

removed by liposuction. The glandular component, which is normally underneath the nipple area, is excised (removed) through a small cut within the areola (the area around the nipple). This operation is relatively invasive. Mr Vadodaria prefers to insert a plastic tube (suction drain) underneath the skin following such a procedure for a period of 12 to 24 hours.

This type of procedure requires extended time in the hospital with
a view to remove the drain either on the later part of the same day or next day. As a result, an overnight stay is often
required (with the associated additional costs).

There is increasing awareness of and demand for gender reassignment. The removal of female breasts remains an essential procedure for body contouring transformation in patients undergoing gender reassignment from female to male. We perform breast removal procedure which is also called subcutaneous mastectomy.

following massive weight loss. This operation leaves behind more scarring. The level as well as size of the nipple is optimised. The patient may require one to two nights stay in the hospital. The operation consists of removal of breast tissue, adjustment of loose, excess and redundant skin as well as re-positioning of the reduced size nipples. The breast consists of two main parts, a firm  and  dense  glandular  tissue and a soft fatty tissue. There is a difference in the ratio of glandular to fatty tissue in any breast from individual to individual and in gynaecomastia there may be an excess of both. Liposuction is usually performed if there is predominantly a diffuse fatty enlargement of the breast.
This process usually consists of sucking out the fat through a small tube which is inserted via a 3-4mm incision. If an excess of glandular tissue is the prime cause  of breast enlargement then it may be of breast enlargement then it may be removed making an additional cut at thejunction of nipple and surrounding skin. This will normally create a scar, usually around the nipple edge. This type excision can be carried out alone or may be combined with liposuction. Gynecomastia operation usually takes about 90 minutes to complete and this can be
carried out under general anaesthesia, or in some cases under local anaesthesia with or without sedation.

After the surgery, the chest is slightly swollen and bruised for some time and very difficult to assess the outcome of the operation in early postoperative period. It is normally recommended that the patients should wear an elastic
pressure garment continuously for a period of one to two weeks in order to reduce the swelling. The patients should not carry out any exercise for a period of about three weeks particularly following ‘open’ excision of the glandular tissue. Normal activities can be carried out by patients after about six weeks. The complications involved in this surgery are relatively rare. This normally includes an uneven contour to the chest, reduced nipple sensation and inadequate removal of the breast tissue and asymmetry.